By Andy Toovey | Workflow | No Comments

When editing documentary-style projects with interviews, we tend to first cut down our original rushes to sequences containing select highlights, from which we assemble a first cut. 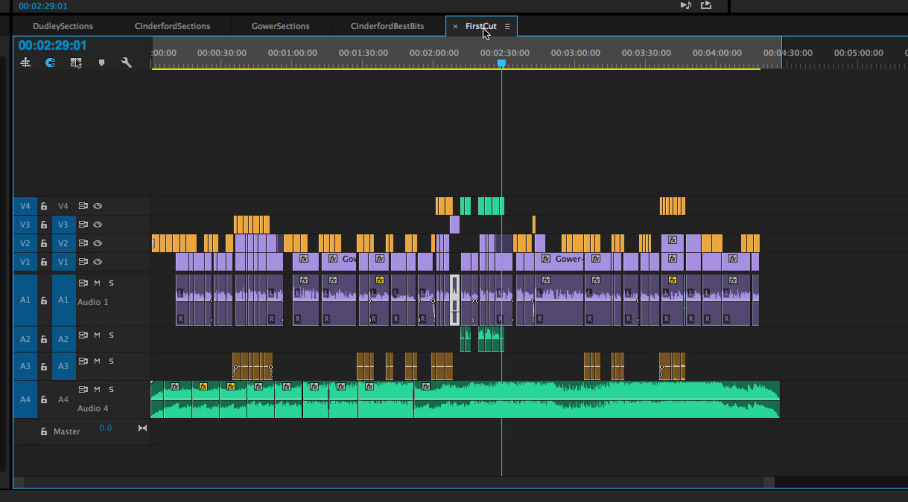 A major timesaver in this assembly process is using double decker timelines in Premiere Pro. END_OF_DOCUMENT_TOKEN_TO_BE_REPLACED

By Andy Toovey | Workflow | No Comments

As part of getting a high quality file of our short film Two Fat Ladies to festivals, I’ve been navigating the perils and pitfalls of uploading to Vimeo. Until fibre optic arrives in the Valleys I’m stuck with a pretty humbling 0.5 mbps upload speed. And on top of that, uploading severely chokes simultaneous downloading on our line…

So when, after 36 hours of uploading a 6.7GB ProRes LT file to Vimeo via the web interface, the upload terminated at 96% I was ready to throw myself through the velux skylight and plummet to the concrete below. END_OF_DOCUMENT_TOKEN_TO_BE_REPLACED

By Joe O'Hare | Workflow | No Comments

I’ve been working on some green screening this week for a project called ‘Question’ we’re working on for Bethel Church, Cardiff.

Filming took place in the Bethel Church hall during the daytime. We wanted to control the light as much as possible and so blacked out any natural light coming through windows as much as possible, as well as turned off artificial light sources in the room. Up went the green screen – it was nice to use a pop-up one as you’re able to get a consistent surface far easier than pinning up green cloth. We got the camera set up in a rough position and our presenter (the glamorous Cynan) in front of the green screen.

Time for some light.

The green screen was lit with two portable floodlights each side that were positioned in order to get a consistent spread across the green screen. For Cynan, a keylight was set up fairly close camera right and a back light further away camera left. Adjustable LED’s were used for this with varying levels of diffusion, created by placing circular diffusers on mic stands in front of each light. We adjusted the positions of the lights in order to get a natural look with no heavy shadows.